“The company has a right to stay in business during a strike.”

If the Union wins an election, the only thing it wins is the right to negotiate. The Union uses the threat of strikes during negotiations to put pressure on the company to meet their demands. But in reality, strikes put more stress on employees – it is their livelihood on the line.

A strike typically happens when the parties cannot reach an agreement on a contract. When the Union calls a strike, there are serious consequences for the workers. Regular pay stops. Benefits can stop, too, since they are often tied to your work status. Union dues, however, often don’t stop and members are still obligated to pay them. 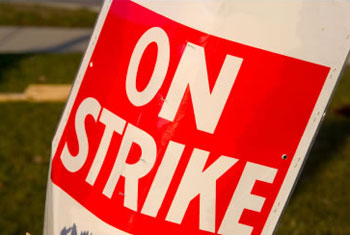 Striking workers are normally not eligible for unemployment compensation. Sometimes the Union will say it has a “strike fund” to take care of striking workers. But these rarely equal normal wages, and typically don’t have enough funds to support a long strike.

That means it can hire replacement workers for anyone who goes on strike. Replacement workers can become permanent in some cases,
even when the strike is over. There is no guarantee that striking workers would get their jobs back.

Even if the Union calls a strike, there is still no guarantee that the company has to agree to its demands. There actually is no law that says there even has to be a first contract. As a matter of fact, in a recent study over a 13 – year period, when a U.S. union won an election and was certified for bargaining only 56% – just over half – were successful in ever reaching a first contract.

You have to decide if you trust the union leaders, especially when it comes to making important decisions like calling a strike.